A Biblical Perspective - The Psalter II

The colour of the conical-shaped feature at the top right of the map has been specifically chosen for its literal association. This is indeed the Red Sea. As with several other features a 90° rotation of the main map makes it easier to recognize to our eyes. The Red Sea is a very significant location in the Old Testament. It is where Moses parted the waters to allow the Israelites to escape from the pursuing Egyptian army as they escaped to the Promised Land. Its prominence and colour on this map is clearly intended to invoke this story from the Book of Exodus. A closer look at this section of the map reveals that the Red Sea is actually 'split' with a dry passage shown between. Could the dark blue line on the larger section be intended to represent the wall of water held back by Moses' command until the Israelites had crossed and then released on the Egyptians as they attempted to follow? 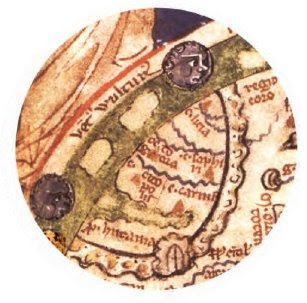 This mountain-like walled enclave with its single gate represents one of the most apocalyptic stories from the Old Testament. The prophet Ezekiel had warned of the day when Gog, the chief Prince of the Land of Magog would sweep down from the North and devastate the land foretelling that the Day of Judgement was near. The gates shown were known as the Gates of Alexander and were reputed to be all that held these destructive forces back. The gates were so named because legend had it that it was Alexander the Great who had built them in a narrow pass to seal in the fierce tribes from the north. But it was also part of the legend that these could not last forever and Gog and the Magog would one day break through. It was a story that all Christians of this period would have been familiar with and this section of the map is intended to convey this threatening and ominous presence. 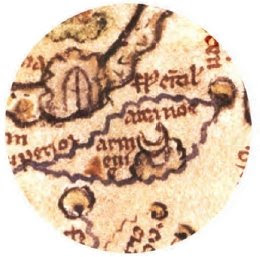 The story of a gigantic flood and a boat in which a small group of chosen people and animals survive appears in many cultures around the world. Not surprisingly it is the biblical version that is portrayed on the Psalter map. The search for the ark itself has fascinated generations and continues today. This map has played its part in informing the search because, as can be clearly seen, the ark is shown marooned high between two mountain peaks with the words 'area noa' and 'armenia'. Just above 'area noa' can also be read the word 'Herat'. This is accepted as being Mount Ararat located on the present-day border of Turkey and Armenia. In the final years of the twentieth century satellites were used to take detailed photographs of the whole area and the images released caused great excitement in some quarters. However, in the thirteenth century when this Psalter map was created, there was no controversy or doubt about the ark's existence or location and it would have been drawn on with the same conviction as any of the other features.