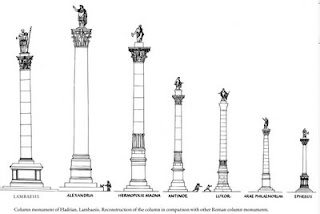 Hadrian set a standard for others to follow across the Empire. He developed the building industry at Rome, reorganized by Trajan, with the year 123 alone widely recognized as an annus mirabilis in the history of the Roman brick industry. According to an ancient biographer, he ‘enrolled builders, geometers, architects, and every sort of expert in construction or decoration on the model of the legions, in cohorts and centuries’. On his provincial travels he commissioned buildings himself and encouraged the architectural efforts of both local patrons and the Roman army. At Stratoniceia, renamed Hadrianopolis after his visit in the same year, he encouraged the local government to repair a neglected private house, rather than leave it to ruin. Despite his own interests in architectural design, he ordered all dining-rooms, porticoes, crypts, and garden areas (topia) existing in Roman camp buildings to be pulled down, on the grounds that they were offensive to the ideal of Roman fortitude, an anecdote which incidentally shows how misguided the conventionally austere image of the Roman camp is and how deep-rooted was the craze for aedificatio, even in such unlikely contexts. Hadrian removed all these trappings of architectural luxury and enforced a much more appropriate idea of construction.

In one of several speeches to the Roman troops at Zara on the border of Mauretania on 9 or 10 July 128, Hadrian admired an auxiliary cavalry detachment, the Ala I Hispanorum, for its proficient building work:

You have brought to completion in a single day [fortifications] which others spread over several days; you have built up a wall of long stonework of the kind made for winter quarters designed to last in a time not much longer than a wall is built from turf, which is cut in equal measure, easily transported from the quarry, handled and built without trouble, smooth and malleable according to its nature: but you [have built it] with huge, heavy, unequal blocks of stone which cannot be quarried or lifted or set in position without inequalities appearing between them; you have driven a ditch in proper fashion, hard and rough with gravel, and made it smooth by scraping the surface.

The emperor’s words mirror the rhetoric of the soldiers’ architecture. The whole imperial address was inscribed for posterity on the pedestal of a commemorative column in the auxiliary camp at Lambaesis in Numidia. Erected at the centre of a large precinct 200 metres square, this monument is comparable in size to other honorific columns erected later at other cities in the empire, particularly those at Hermopolis Magna and Alexandria in Egypt. Even the stonecutter’s work in recording the speech shows how certain parts of the speech were emphasized. He preserved the powerful impact of the language describing the large stonework of the wall by raising the initial letters of the key words, Lapi[dibus] Grandibus Gravibus Inaequalibus (‘with Huge, Heavy, and Unequal Stones’), a phrase which recalls the early Roman epic adored by Hadrian, with its striking rhythm of ascending tricolon and alliteration. The text placed emphasis on the form, size, and texture of the architectural materials used to make even this most routine of architectural creations. Whereas the grassy sods of earth (caespes) used for a typical earth rampart were smooth (planus) and pliable (mollis), the blocks of stone were heavy (gravis), huge (grandis), and of different sizes (inaequalis). A work in stone was a far more impressive achievement, one that deserved to be praised in an oration and recorded on a monument for posterity. Similarly, Apuleius later compared his literary rhetoric to the rapid and haphazard piling up of unworked stones in a wall without any attempt at achieving evenness, regularity, or alignment.The glorification of stones of large dimensions was intended to instil a sense of the ‘monumental’ nature of Roman architecture on the grand scale, and the use of language from ‘monumental’ Latin literature reinforced that. Moreover, once the construction was complete, it was thought to inspire the soldiers for a successful military performance. The epic tone of the emperor’s speech elevated their banausic labours in constructing a fort to a heroic military achievement. It marked the creation of monumental architecture.