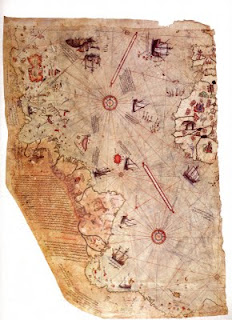 The Piri Reis map, showing the coastline of Antarctica under the ice.

In 1929 a group of historians at the Topkapi Palace in Istanbul, Turkey, found something rather fascinating. Imprinted on an old Gazelle skin dated 1513 they uncovered a segment of an amazing map. The chart seemed to depict part of the Atlantic Ocean and included the Americas and Antarctica in perfect detail. The mysterious thing was it had been drawn up only a few years after Columbus’ discovery, and three centuries before Antarctica was even known about. Over the years since the find, debate has raged about how the cartographer had assimilated his knowledge. Did an advanced ancient race, or aliens, create his source charts, or have the map’s features been adapted to fit wishful-thinking theories?

The map came to be named after its creator – Piri Reis. The word ‘Reis’ actually means ‘Admiral’, and it was discovered that Muhiddin Piri had originally worked as a privateer for the Turkish Ottoman empire, before accepting a role in the imperial navy. On his travels, he had collected all manner of charts, sketches, drawings and diagrams of coastlines and lands in the known world. In 1513, using an exhaustive list of source charts and data, he drew his first world map, which is what we now recognise as the Piri Reis Map. He is known to have compiled another, quite different, global study in 1528 and continued to enjoy a distinguished military career until 1554, aged almost 90, when he was beheaded by the Ottoman Sultan.

The segment of the map that still exists is only a portion of the original, and shows the Atlantic Ocean from the west coast of Africa, to the east coast of South America, to the north coast of Antarctica in the south. Piri also included details about his sources on the map, claiming some of the reference charts he used were from the fourth century or even before. The map is not drawn with the straight lines of longitude and latitude found on today’s maps. It was designed using a series of circles with lines radiating out from them. These types of charts were called ‘portolan’ maps and were used to explain sailing routes, guiding ships from port to port, rather than giving sailors a definite position in the world. Ancient charts of this type were widespread, and Columbus is said to have used one when he set off to find the Americas.

Many Piri Reis Map enthusiasts believe the level of geographical detail and mathematical knowledge needed to create the map was far beyond the reach of navigators from the sixteenth or earlier centuries. Indeed, experts at the United States Air Force in the 1960s found the map so accurate they used it to replace false information on their own charts. Some people believe the map could only have been achieved with the help of aerial surveys, and suggest alien creatures mapped the planet thousands of years ago, leaving their results behind to be copied by Mankind.

The map’s seemingly accurate depiction of the geography of Antarctica is its most fascinating aspect. Antarctica was discovered in 1818, and the actual land of the continent was only mapped in 1949 by a combined British and Scandinavian project that had to use modern equipment to see the land underneath the mile-deep icecap. The theory put forward to compensate for this is that an ancient race using advanced, but now lost, technology was able to accurately record details of the continent before it was covered with ice.

Most experts suggest Antarctica was ice-free no later than 6,000 years ago, although others believe ice has covered the continent for – at least – hundreds of thousands of years. Similarly, many cartography experts claim the accuracy of the portolan system of map drawing is more in the eye of the beholder, and many maps of this time included imaginary continents in the south Atlantic. But there are still some unexplainably accurate details on the map. The Falkland Islands are placed at the correct latitude, despite not being discovered until 1592, and the unknown Andes mountain range was included on the map of America. Similarly, Greenland was shown as three separate islands, a fact only discovered this century.

So the debate continues. Did Piri Reis just strike lucky with cartographic guesswork? Or did the Turkish admiral have access to charts and maps created by an advanced race, living on the planet thousands of years ago?