Astronomers find most Earth-like planets yet 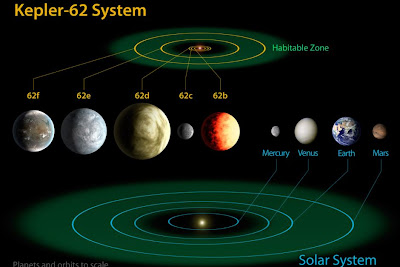 A NASA diagram compares the planets of the inner solar system to Kepler-62, a five-planet system about 1,200 light-years from Earth in the constellation Lyra. 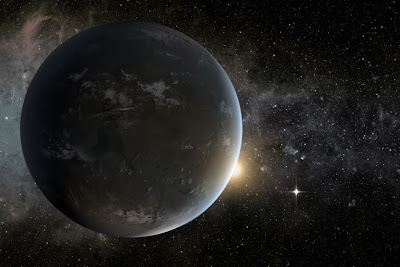 
Astronomers using a potent NASA space telescope to search for life say they have found planets which are the most Earth-like candidates yet.

Two of the five planets orbiting a Sun-like star called Kepler-62 are squarely in the habitable zone - not too hot, not too cold and possibly bearing water, NASA scientists report in the journal Science.

"These are the most similar objects to Earth that we have found yet," said Justin Crepp, assistant professor of physics at the University of Notre Dame.

The two planets are slightly larger than ours, with radiuses measuring 1.41 and 1.61 times the radius of the Earth.

Scientists do not yet know if their surfaces are rocky or watery, or if they have atmospheres that could sustain life.

But their location and size suggest they "could plausibly be composed of condensable compounds and be solid, either as a dry, rocky super-Earth or one composed of a significant amount of water," the study said.

Other studies have indicated that planets with a radius under 1.6 "have been found to have densities indicative of a rocky composition".

Astronomers detected the planets by observing their star dim when the planets pass in front of it, a process known as a "transit".

Professor Crepp first saw a dot near Kepler-62 about a year ago, and has studied the movements of the system for months in order to confirm the discovery.

"What really helped is that this star has five planets," he said.

"You can mimic one planet with another event, but when you have five of them and they're all periodic, that helps to put the nail in the coffin.

"It's hard to make that kind of signature with anything else that you can dream up."

In late 2011, NASA confirmed its first-ever planet in a habitable zone outside our solar system - Kepler 22b, spinning around its star some 600 light years away.

However, the large size of that exoplanet, at 2.4 times the size of the Earth, has left some doubt over whether the planet is rocky, gaseous or liquid.

Kepler is NASA's first mission in search of Earth-like planets orbiting suns similar to ours.

It is equipped with the largest camera ever sent into space in its search for planets as small as Earth, including those orbiting stars in a warm, habitable zone where liquid water could exist on the surface of the planet.